When I first heard John Mayer – what struck me was how old and wise his guitar playing was.

I’ve not been a follower of his – nor do I own any of his stuff… but there’s no doubt that he’s incredibly talented, and has worked at it.

I came across a BerkleeBlog post about a clinic he gave in July, and I was struck by how much of what he talked about related to me, my process, and what I’ve gone through in writing – not just in the current project, but in writing and representing myself as an artist over the past 5-6 years.  A few choice quotes that struck me:

“…This is not a time to promote yourself. It doesn’t matter. This is the time to get your stuff together. Promotion can be like that. You can have promotion in 30 seconds if your stuff is good. Good music is its own promotion.”

“You got the distraction of being able to publish yourself immediately, and it is a distraction if you’re not done producing what the product is going to be that you’re going to someday use the promotion to sell…I had to go through the same thing I’m talking to you about – what you have to go through – which is to completely manage all the distraction. Manage the temptation of publishing yourself.” 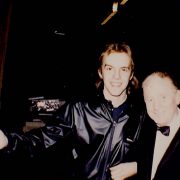 The post-apocalyptic guitar is taking shape. My lu

An identical copy of the very first headphones I e

Round 3 on the post-apocalypse guitar.... Some rou

Something wicked this way comes. Work on a post-ap

This little human graduated to a bigger bike today