those who have helped

I was 11 or 12 – it was Thanksgiving, and my Dad piled me and my sisters into his station wagon for the yearly trip to my uncle’s house for thanksgiving. What lay in store for me would change my life immeasurably.

When we got there – being impatient in my own shoes, I was milling around my uncle’s place, when a stack of records caught my eye, leaned up next to a record player with a pair of headphones attached.  I gingerly leafed through the covers, one by one… having a bunch of older cousins, I didn’t know who they belonged to, and I was fighting between the urge to look through them and the fear of being scolded for it – after all, they weren’t mine.

They were all fascinating.  Other than some 8-track tapes I had, I didn’t own any albums – and the covers all called to me, maybe just because they could.  Not completely mesmerized, but definitely taken, I was going through them one by one when my older cousin Chuck broke the spell I was in – dressed in a uniform, he was getting ready to leave for some kind of air force reserve duty – funny looking back, because Chuck was ANYTHING but military.  He was, unbeknownst to me at the time, a bit of a party animal.  Didn’t matter – all I knew was that Chuck was older and always cool.

Of course, it WAS Thanksgiving – and I would soon have to sit at the table and eat with the other kids, etc. – but it didn’t stop me from at least looking at the covers, one by one… gazing at the artwork…flipping them over and reading the notes on the back – intrigued by all these people who were making records – a format that I was already squarely addicted to from way earlier on.  See, at this point, music already had a tremendous hold on me, from age 4, maybe earlier.

I can’t remember for sure, but I’d guess that I put on three or four, and played them (through the headphones, mind you… this was not a large apartment we were in, and it was Thanksgiving , so loud music was not going to be happening here. (not to mention the fact that Chuck’s setup was a fairly crappy little turntable with the clamp-on speakers)

I’d be the first to admit that it was the covers that were pulling me.  After all, they were pieces of art in their own right.  And it wasn’t as though album covers were completely foreign to me… we had albums in the house already, my Mom being a fan of the Beatles, Carole King, Carly Simon, Joni Mitchell, and many many others – and we had records in the house since I was born. But these were pieces of art, placed by the universe in this place, and at this time, apparently for the sole purpose of turning my whole world upside-down.

Because at around the fifth or sixth record, I came upon this cover: 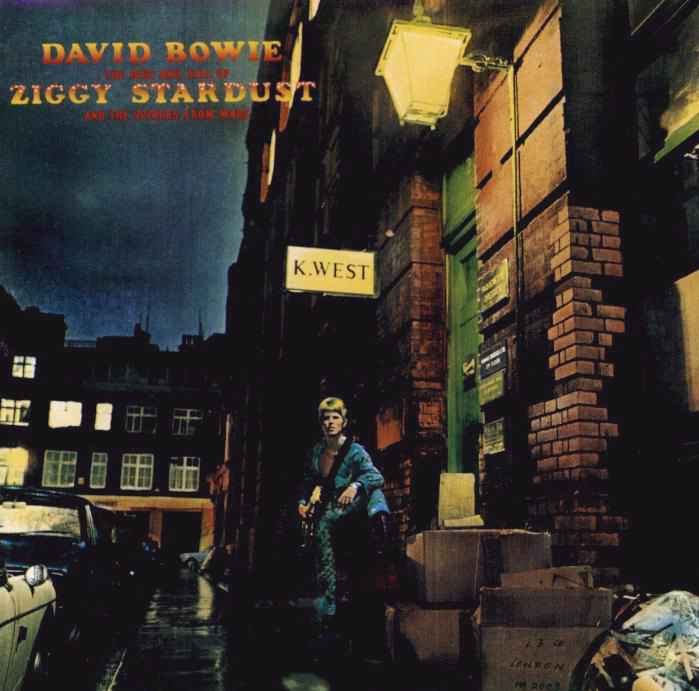 And when I turned it over, I saw: 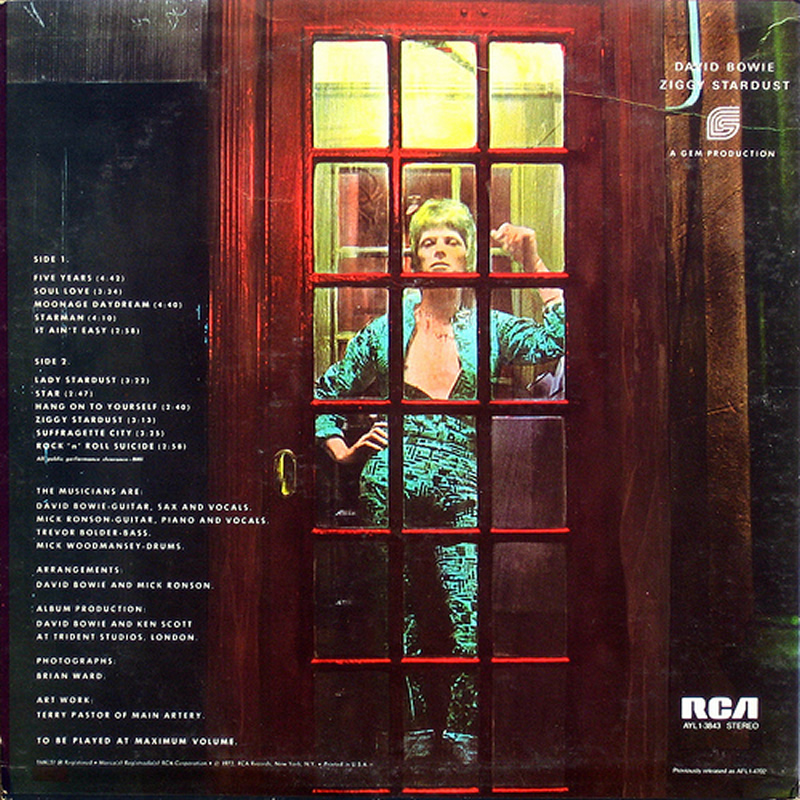 I cannot account for the attraction at the time – (It was dark – and wet…I had already found nighttime to be a compatriot in lonely preteen times…maybe that was it…) –  but there it sat.

And there, on the bottom of the back cover, it said:

I took the record out, and placed it on the turntable… I listened through the tracks (in those days, you listened – not just skipped…), and then it hit…

It is, even now, a tour-de-force – particularly on headphones.  It’s not just big, it’s effing huge.  To top it off, Chuck’s headphones had a mono/stereo switch, which , being the twitchy eleven I was, I was playing with as the tracks were playing – only adding to the hugeness of the track – I started keeping the track in mono until the chorus hit, then throwing it wide open…

My whole universe expanded that night.

The power of music was already familiar to me, but this wasn’t just power – it was nuclear-on-steroids.

My world was blown so wide open that even now, I can only surmise that the universe was conspiring for me – because some thirty-six years later, I can still recall the way my world was rocked.  (This from someone whose parents woke him to watch the moonwalk…. that was chump change compared to this.)

As soon as I could, I went to a record store to buy the album – and they didn’t have it.  So I bought another Bowie album.  And then another… and another.  Yes, the monkey was squarely on my back.  And yeah, of course, Bowie was a huge presence on those albums.

through each and every one I bought, there was this guy: 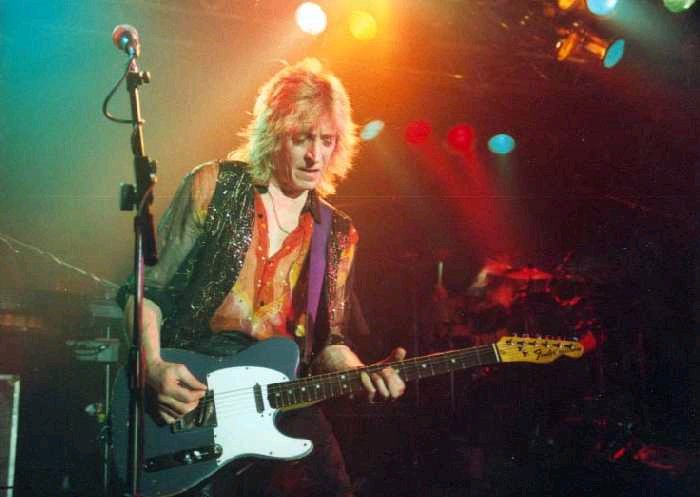 His name was Mick Ronson, and he wasn’t just the balls-to-the-wall-yet-heartful guitar player on these tracks… he arranged, did piano parts, produced, did backing vocals, etc. etc.  And this was on just this handful of albums I got my hands on.  His imprint is unmistakable.

And if you already know who he is, then hopefully you know who he is.  But if you don’t, he was a HUGE influence on literally hundreds of artists.

He is listed by Rolling Stone magazine as one of the 100 greatest guitarists of all time.

And on that first album alone – the closing guitar solo on “Moonage Daydream” is revered around the world – it’s listed as one of the top 100 guitar solos of all time in a whole bunch of places.  It soars… it dances in this poignantly melancholic way with the strings behind it.  It’s brilliant, touching and unforgettable.

And that’s just one solo.

He has a pretty incredible list of credits – which is a great list to be sure – but it doesn’t begin to touch on what he meant to people.

Fast forward…It’s 1980. I’ve lived with and been influenced by Ronson’s work (and many others, of course) for years at this point – and have been recording and arranging myself for some time.  Turns out that Mick is playing with Ian Hunter at a club called Detroit’s in Port Chester, NY.  Having never seen him before, I got two tickets, and my girlfriend and I went.  No offense to Ian, but I went to see Mick.

I wasn’t disappointed.  The show opened with a piece that was obviously meant for him – no vocals, just he and the band… and he was as brilliant live as everything I’d ever heard him do on record.

After the show, I went around to the back of the club in what I figured would be a vain attempt to meet him.  I waited, and waited… there weren’t many waiting there, which inevitably leads one to believe that you missed them already – but wait I did.

Obviously tired, and a little buzzed (a bottle of Jack Daniels in his hand), Mick walked out  about 25 minutes later.  I approached him – hoping at the very least to get an autograph.

Not only did I end up with an autograph, but he sat there and talked with me for at least ten minutes.  Ten minutes. For this 18-year-old kid from nowhere.  And for one of the very few times in my life, I got to genuinely thank someone who was such a huge musical influence to me.

But here’s the thing.

He really listened.  He wasn’t paying lip service… he was genuinely interested.  Even when the support staff was walking around freaking out because someone had messed up the rental car they were using – he sat there with me – and listened.

And when we were done.. he gave me heartfelt thanks, signed my tickets, and got Ian Hunter to do the same.  One of those tickets now rests with a very dear friend – the other is one of my most prized possessions.  Not because of the autograph… because of the experience behind it, and the very kind, extraordinarily talented man who helped this music come out of me.

In April of 1993, word came that Mick had passed away at the entirely-too-young age of 46.  I spent the early evening alone, with a drink and that amazing solo – and wept.

Not out of loss… out of gratitude.

It is for this reason that I add him here – it’s the very least I can do.

Postscript: There are efforts to have Mick Ronson inducted into the Rock and Roll Hall of Fame – which should have happened long ago.  Please support them:

My grandfather's church at twilight. ❤

Home of the first jukebox I fell in love with. ❤

He's not even three, and he's practicing double st

Somebody wanted to curl up in a box like a kitty.

When you have pretty clear evidence that you are a

I love getting these amazing monthly Patreon packa

Vocal area of my studio is now properly deadened.

Nothing replaces old-school riding fader on a voca

My tech staff hard at work. ❤