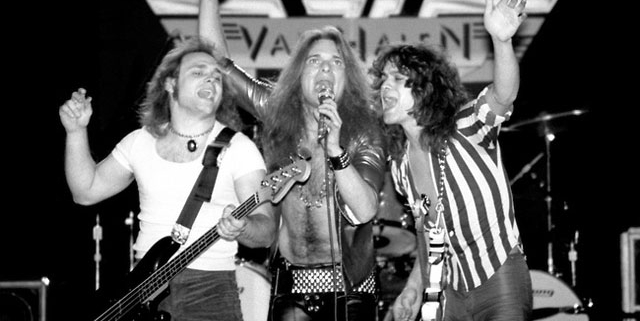 Which would have made me 14.

I was hanging out in my room in New Jersey… with WPIX-FM, my favorite station, playing – I listened to it all the time.

They had been playing this single – You Really Got Me – by this new band Van Halen, for at least a few weeks. And I loved it.

Well, on this early Saturday morning, the DJ came on-air and said… “Anybody who likes this new band Van Halen… call me up.” That’s nearly verbatim.

He answered! He said “Wanna come down and meet the band?”
I was on a bus from Jersey within two hours.
Out of the 15 or so people who called, two of us showed up.

We arrived at the Daily News building on east 42nd street in Manhattan… and seeing as there were only two of us… they asked if we wanted to interview the band for the station.

We both said yes. They asked if we had heard their album. Neither of us had, so they put it on for us. It had gotten through maybe four songs when the band walked into the door, with their manager.

They were an opening act at the Palladium in NYC – for Journey and Ronnie Montrose. As such, comp tickets were rough for them to come by. I know this, because I sat there and listened to their manager on the phone, trying to wrangle tickets.

She interviewed Eddie. I interviewed David. I have absolutely no recollection of the interview itself, because I was nervous as hell. But we did it.
And they gave us each a pair of tickets.

Well… I had a date set up back in NJ with my then girlfriend for that night. I found a payphone, and called her… she was NOT happy about my wanting to put it off, so I said OK – see you tonight.

Then I realized that the band had been wrangling for the tickets… so I thought I’d bring them back to them, in the hopes that they might be able to use them.

So I walked from 42nd Street to 14th Street… went to the stage door and knocked. Big burly guy opened the door and said “What do you want?” I said “I’m here from PIX to drop off tickets.”

And he let me in the door, and told me where the dressing rooms were.

I got there before the band. But they were there within 15 minutes. I played Eddie’s guitar… saw Michael’s pristine road gig rack of basses… went down to the stage with them and helped set up Alex’s bass drums (two massive cannons that consisted of 4 bass drums chained together)… messed with a couple of Frisbees that resided in the back of a missile on the left of the stage…
and I ended up sitting 4th row, in an empty Palladium, with David Lee Roth, drinking a baby bottle of Bud.

I never got an autograph. I just gave them the tickets so they could use them, walked back to the bus terminal, and rode back to NJ.

A beautiful end to the story…

While I never got to see Van Halen play, I made friends with people at the radio station that day. I went back to the Daily News building dozens of times, just to hang out there. I met Rockpile and Rick Derringer and Gene Simmons when Kiss was still wearing makeup and no one knew what they looked like without. I got to cue up records, play guitar live on the air behind the station manager Joe from Chicago, and hang out with John Ogle, the newsman for the station – and tear off newsfeeds from the teletype machines.
It remains one of my fondest memories.

p.s. – if you’re the girl who showed up at the station that day too, I’d love to hear from you.