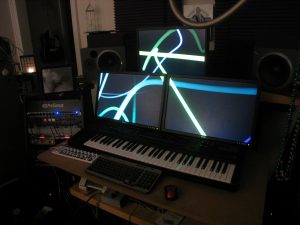 I promised a more thorough update – well, here it is. For those of you who have watched me struggle with moving forward in the studio – you’ll find a great deal of joy in it.

In my previous post about workflow, the studio, art etc., I talked about the need for something that didn’t get in the way of making art.

Over there on the right is the result of the work I’ve been doing.  One single system that now officially takes the place of all the songwriting/sequencing/recording/mixing gear I was using before.

I happened upon the solution totally by chance.

It started like this… I had to replace my audio interface.  (I had to start somewhere in casting off the weight, and that was as good a place as any. )  After a bunch of research, I settled on a Presonus Firestudio Project.  Very reasonably priced, but with good reviews and a really decent feature set – and it looked to be compatible with all the major software packages folks are using.   (Including Reaper – which I still wasn’t at all sold on.)

But at that moment, something snuck up on me, tapped me on the figurative shoulder and said “pssssst… look over here.”  No kidding.  It was under the details, on the sales page for the interface, over at Sweetwater.    It said, basically,  “…..comes with Studio One Artist software.”

Went to the Presonus site and looked at the page for Studio One.  (At this point, I was more than a little skeptical… I’ve had folks trying to sell me on their audio/sequencing software for longer than some of you have been using computers.  No, really.)  There was a downloadable demo…

Here’s where I cut to the chase. 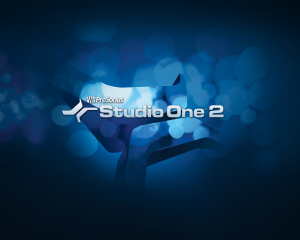 Studio One is just brilliant.  It is so incredibly sensible and intuitive that I was making music – I mean really making music – within an hour of installing it.  The workflow, from sketching out a song, to virtual instruments, to routing of audio and effects, is just effortless.

Hence the title of this post – an old-new way of working.  See – using a tape recorder is simple.   Wanna record?  Hit record.  The more layers of crap that get in between you and your creative process, the worse off you are.  Well, Studio One is just like hitting record.  There’s a sensibility to it that is just plain beautiful.

Within 2 weeks, I upgraded to the pro version – and as a result, that workflow now extends straight through mastering and final CD authoring. (not that I’m going to take mastering on, as it’s a whole black art unto itself… but Studio One not only provides a perfect environment for creativity… it also gives you the tools to bring it all home to a master when you’re done. )

Now I’m not saying that there’s no learning curve.  The deeper you go – the more delicious stuff you find.  But what I AM saying is that the curve isn’t a climb up Mt. Everest when you start out.   And the simplicity inherent in that does NOT mean consumer-grade crap.  This is 100% pro from start to finish.  (It’s no wonder – the team that created it is responsible for a whole bunch of  stuff, including Cubase and Nuendo.) If you’re a recording musician – go download a demo.  Really.

In the end – this is all tech talk.  And, despite where things have taken me – I’m not a techy at heart.  I’m a songwriter and artist, looking for a process of working that, umm, works… that doesn’t get in the way.

Quite by accident, I found it.  I’m incredibly grateful to the folks at Presonus for giving virtual birth to this gem.  It has jumpstarted my process in a way I could not have foreseen – and the recordings that are coming out of here, even at this early stage, are warmer and more professional than anything I’ve ever done.

So starting tomorrow, a little Presonus logo will be prominent on this site, and on the site for the weekly NYC radio show I produce as well.  I’ve already recorded three episodes with Studio One and the Firestudio, and they came through with flying colors.  When you see those logos here, or there, you’ll know why.

Because Studio One just plain kicks ass… and at least the next three albums that come out of here will do so because of it.  Which brings a very long search to an end.

Thanks, as always, for your kind attention.